The coming surge in Australia’s budget deficit due to Coronavirus – can we afford it?

Tuesday night would have been Budget night and Treasurer Josh Frydenberg would have been announcing a budget surplus. But, COVID intervened. There was no budget announcement, and any surpluses have now gone – sacrificed to support Australian households, businesses and jobs.

This year, the Treasurers customary budget speech was replaced with a statement to Parliament on the economic impact of the COVID-19 crisis in which he reiterated that the “best way to pay back debt is through productivity enhancing reforms focussed on workforce training and education, infrastructure, cutting red tape, taxation and industrial relations reform”. We expect that a reinvigorated economic reform agenda will likely be the key focus of the October Budget.

Whilst updated numbers will be provided in June, Australia’s deficit is expected to peak at around $200bn (2020-21), or around 10% of GDP which will be the highest since the end of WW2. This will see net public debt nearly double as a percentage of GDP over the next few years.

So, Can we afford it?

Economist, Shane Oliver has explored the coming deficit and public debt surge. With the inclusion of his own projections he explains that whilst not ideal, it is affordable based on five key principles:

The below table shows rough budget deficit projections, taking the Mid-Year Economic and Fiscal Outlook projections from last December as the starting point.

The hit to the economy will mean a hit to government revenue and increased spending demands under some existing spending programs and this is shown in the line called “parameter changes.” This is a guesstimate at present, as a proper understanding on the size of the hit to the economy and how quickly it might recover is still unknown. But the negative impact on the budget is likely to be bigger next financial year than this financial year because unemployment will average far more next financial year (around 8.5%) than this financial year (around 6.3%) and that provides a guide to lost Federal revenue and increased expenses.

Put simply, the Government’s necessary fiscal support response and the hit to the budget flowing from the hit to the economy will see the budget deficit blow out to around $130bn this year and $200bn next financial year, before falling sharply from 2021-22, as support programs end and the economy recovers.

This would see the budget deficit as a share of GDP peak at around 10% of GDP in 2020-21, which would be its highest since World War 2. 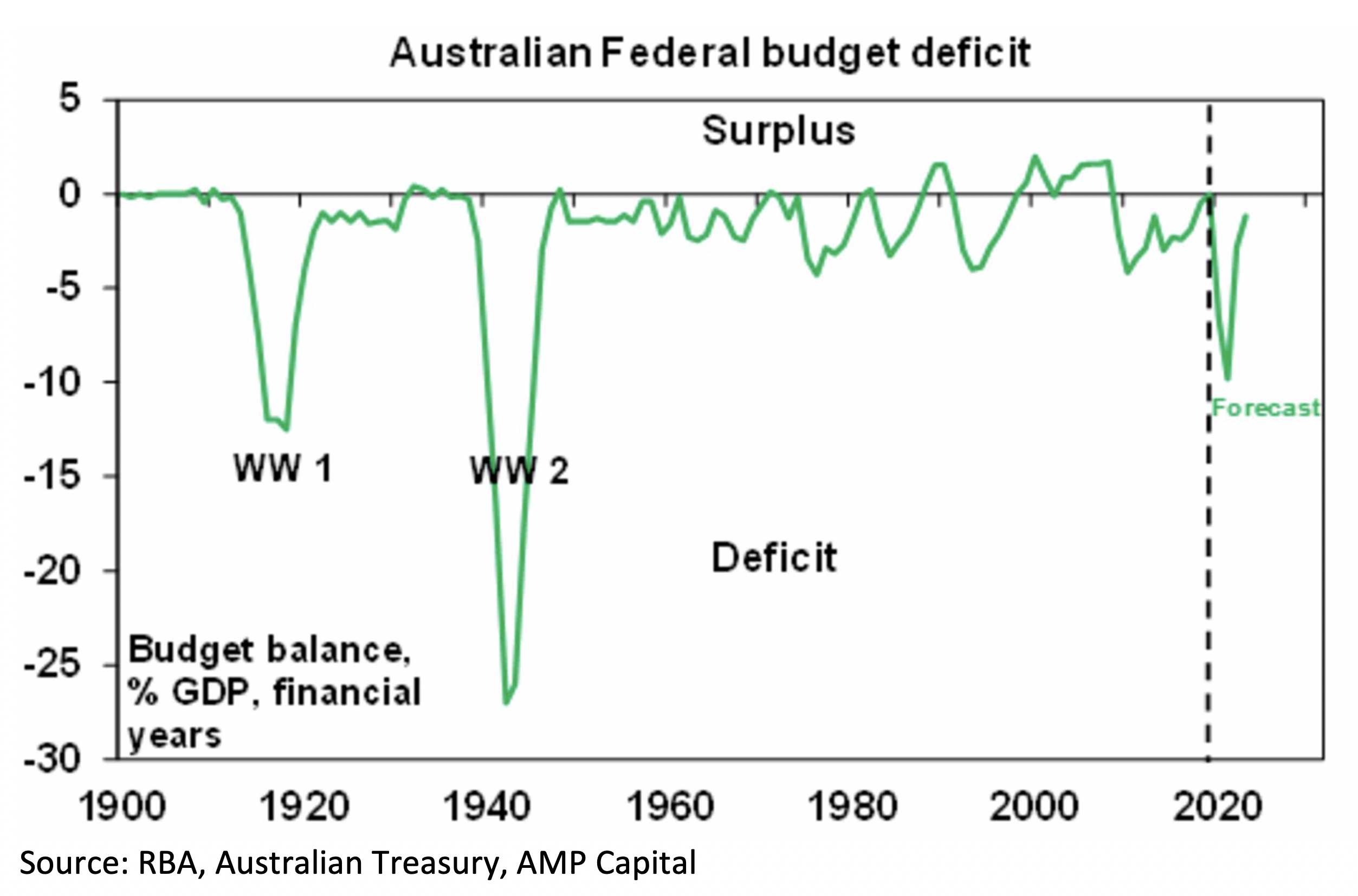 Spread over several years, this will add nearly 20% of GDP to Australia’s public debt.

Can we afford the surge in the deficit and debt?

It’s not ideal, but it is affordable.

First, it needs to be stressed that the stimulus is absolutely necessary. If the Government hadn’t imposed the lockdown the healthcare system could have been overwhelmed resulting in many more deaths than the 97 recorded so far. Australia has seen 4 deaths per million people, but the UK and Italy have seen around 500 deaths per million and if that had occurred in Australia it would mean the deaths of around 12,500 people. And if the Government along with the RBA and state governments had not moved to protect jobs, businesses and incomes, the prospective hit to the economy from the lockdown would be far greater, with a much slower recovery in prospect (and probably an even bigger blow out in the budget and public debt). Looked at another way the 10% or so hit to the economy this half year required a similarly sized stimulus program to offset it.

Second, it makes sense for the public sector to borrow money from households and businesses (metaphorically) at a time when they are stuck at home and can’t spend due to the shutdown or won’t spend due to uncertainty, and for the Government to give the borrowed funds to help those businesses and individuals that are directly impacted. Using the funds to subsidise wages was a very smart move as it keeps people employed, keeps them linked to their employer and helps minimize confidence zapping unemployment headlines.

Third, the support programs have been designed to support the economy when they are most likely needed – in the June and September quarters – and to phase down thereafter as is apparent in the table above showing policy stimulus falling sharply from 2021-22. So, under current law we have not seen a permanent step jump higher in government spending. This contrasts with what seemed to happen post the GFC.

Fourth, Australia’s net public debt is relatively low at 23% of GDP in comparison with the US at 84%, the Eurozone at 69% and Japan at 154%. See the next chart. And even with the projected budget deficit adding 17% of GDP to public debt by 2021, according to IMF projections Australia’s net public debt will remain relatively small at around 40% of GDP in two years’ time. So, Australia has far greater scope to do fiscal stimulus than other comparable countries.

Fifth, the cost of borrowing for the Federal Government is very low at just 0.25% for three years and 0.95% for ten years. Of course, this is partly being facilitated by the RBA buying bonds in the secondary market, although even if it weren’t bond yields would be low anyway reflecting the massive hit to the economy from the shutdown. And the odd thing about the RBA holding more Government bonds is that much of the interest paid on the bonds by the Government to the RBA will flow back to the Government as a dividend.

Finally, the Australian Government is borrowing to finance the deterioration in the budget deficit in Australian dollars and given the turnaround in Australia’s balance of payments from a large current account deficit to a surplus or around balance in recent years, it’s not as if we are dependent on foreign creditors risking some sort of foreign currency crisis.

The blow out in the Australian Government’s budget deficit and public debt is not great. But it’s a necessary price Australia has to pay to minimise the loss of life from the virus and at the same time minimise the hit to people’s livelihoods from the shutdown. In terms of getting the debt back down, a temporary deficit levy would be preferable to tax hikes or the cancelation of tax cuts. The best approach to getting debt back down is to grow the economy aided by a reinvigorated economic reform agenda.

Source: Shane Oliver, The coming surge in Australia’s budget deficit and public debt due to Coronavirus – can we afford it?