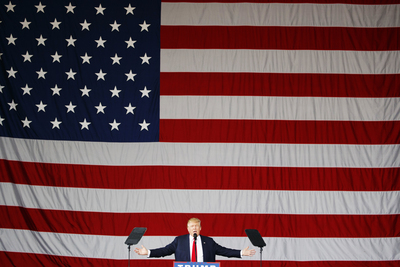 “I don’t have to tell you things are bad. Everybody knows things are bad. It’s a depression. Everybody’s out of work or scared of losing their job. The dollar buys a nickel’s worth. Banks are going bust. Shopkeepers keep a gun under their counter. Punks are running wild in the street. There’s nobody anywhere that seems to know what to do, and there’s no end to it … but there’s at least one thing you can do. Get out of your chairs, head to the windows, and shout, I’m as mad as hell, and I’m not going to take it anymore!”

Sometimes, you get the feeling that life really does imitate art. Network may have been a satirical film made 40 years ago, but yesterday it hit rather close to home. We are living in a time when outrage and sensation are the dominant impulses in our media, when our politics feeds off the anger and fear people have about their society and way of life.

Few of us can imagine seeing a major political party adopt as its slogan: “I’m as mad as hell, and I’m not going to take it anymore!” Even fewer would have believed that celebrity Donald Trump would become the 45th president of the United States of America.

These are populist times but what does this mean and why?

Author Benjamin Moffit helpfully describes the global rise of populism as featuring an appeal “to the people” versus “the elite”, through “constant evocation of crisis, breakdown and threats” rather than the decorum of orthodox politics.

Conventional wisdom runs that this populism if fuelled on economic insecurity, by tapping into the anxieties of the working class. Whilst there are elements of truth in this perspective, as one political writer has noted, the average Trump-supporting household draws a median income of $72,000, which is $16,000 greater than that of the average American and also higher than the median income for Hilary Clinton supporters (around $61,000). It is not just about the money!

Others view this new populism (spreading across the western world) as married to an aggressive nationalism. People have become hostile towards immigration and multiculturalism, which some blame for a pseudo “political correctness”. Others are developing an increasing protectionist attitude towards global trade and foreign investment. This has certainly buoyed populist figures including Donald Trump, Britain’s Nigel Farage, France’s Marine Le Pen and Pauline Hanson.

If we are to explain the contemporary rise of populism, especially that of the right-wing variety, we are safest to say that the sources are multiple. The resounding motivation seems to be a hunger for change, and a 24 hour news cycle provides the perfect platform for populist politicians to tell people they can have it.

Yesterday’s result is just another confirmation that a new style of politics is afoot. ‘Vox Populi’, or the voice of the people has changed the game – ‘they’re as mad as hell and they’re not going to take it anymore’.  It would seem the Clinton campaign based on ‘more of the same’, never stood a chance.

Markets went into immediate meltdown as they tried to factor in the news, but with the US Federal Reserve now unlikely to raise interest rates next month, rallied again overnight. We expect markets to remain volatile, particularly over the short term as we work through a period of policy uncertainty.

Beyond this initial reaction, share markets are likely to settle down and get a boost to the extent that Trump’s stimulatory economic policies look like being supported by Congress, but much will ultimately depend on whether we get Trump the pragmatist or Trump the populist. We suspect that now he has been elected he will present a far more mellowed persona, as we witnessed in his victory speech last night. Congress, along with economic and political reality, can probably also be relied on to take some of the edge off his policies.

All this said, he is Trump and anything could happen. So, its with bated breath that we will watch this next chapter unfold – we can’t help but think perhaps we should be ‘getting to know’ Mike Pence, he may yet get a run…