The profitability of Australia’s Finance industry – dominated by our big banks – has trended down over recent decades.  The return on shareholder funds peaked in the early 1990s after the recession of 1991 and the crash of several banks.

The big players could see non-bank finance sectors growing much faster than banking revenues, and the exhibit below shows their concern eventuated.  These days, banking accounts for less than a quarter of the industry’s total revenue of over $700 billion. 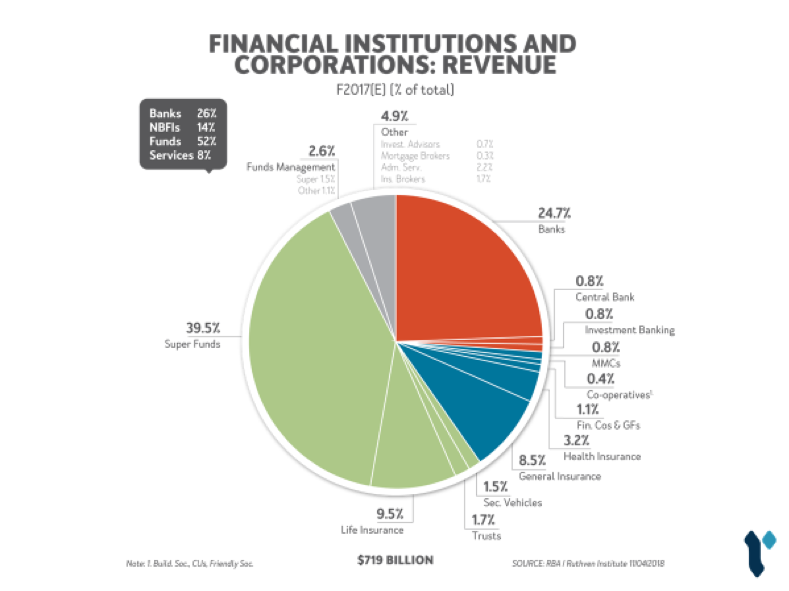 So, the big players diversified into the growth and other finance sectors which they did not understand.  They became theme conglomerates and hoped that concentric marketing to existing customers would create greater profits.

They didn’t and, like all conglomerates, were difficult to manage.  The diversified sectors require different IP, different cultures, semi-autonomy and face different competitors.

The gains began going to the employees, especially C-suite execs, salespeople/BDMs and brokers more than the shareholders.  As competition grew, greed and cheating began and followed the apocryphal “boiling frog” syndrome over the past decade in particular.

Our regulators have been shown to have abrogated their responsibilities, making us wonder what the last $5 billion tax payers’ money has achieved over a decade or so.  Many if not most boards at the big end of town are red-faced.

The Haynes Royal Commission has been thorough, fearless and reformative.  The big financial institutions may now go back to more being more focused than conglomerates, more ethical, easier to manage, and more transparent to Boards.  Just in time to face the new challenge – which isn’t faster growth on the other side of the fence appearing to be greener – but digital disruption. These include online financial services, block chain and other daunting challenges.