The widely-used life insurance equation of ‘10 x annual earnings’ is not enough to secure a family’s long-term lifestyle, the latest underinsurance research from Rice Warner has revealed.

The consulting firm has released its annual ‘Underinsurance in Australia’ report, which found that in order for a family’s standard of living to be maintained in full, life insurance cover of an amount equal to 15 years’ income is required.

Similarly, TPD cover equivalent to 15 years’ annual earnings is required to ensure sufficient long-term finance for a family if one income-earner became permanently unable to work. 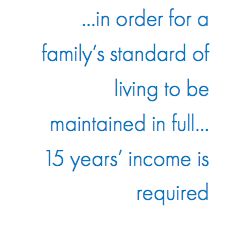 According to Rice Warner, cover of around 10 times the annual earnings of an average Australian couple aged 40, with children, would only extinguish debt and cover existing expenses, until the youngest child reaches the age of 21. It would not replace any savings that could be accumulated if the missing family member was still earning an income, or match their predicted superannuation benefits.

In addition, the researcher warned families that they should not rely on government benefits, such as the Family Tax Benefit, or childcare benefits, as these provide only a modest contribution towards overall living needs.

Co-author of the report, Thierry Bareau, also warned that the rising cost of insurance could lead consumers to question the need for cover.

“The underinsurance problem could grow over the next few years if the insurance affordability issues are not resolved,” Mr Bareau said.

“As the cost of insurance inside super increases, members may start to feel that premiums are eroding their retirement savings, and they may decide to opt-out of the cover. Similarly, super fund trustees may decide to reduce the amount of cover they offer to their members to reduce costs.” 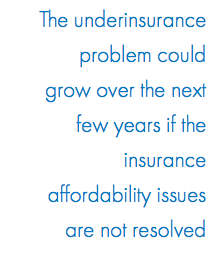 He also highlighted the potential anti-selection issues which may be occurring within group insurance through superannuation, as members who may not be eligible for retail cover are taking advantage of introductory offers which enable them to top-up their cover without underwriting in the first 6 months of joining a fund.

Mr Bareau said one of the ways the industry could work to avoid this potential underinsurance crisis was to review the insurance benefits currently offered within superannuation, particularly in relation to the default level of life cover provided.

“The definitions around TPD may also need to be reviewed. TPD in super was originally intended to provide cover for people permanently unable to work in any role. But now, because of competitive market forces, these definitions have become looser, and people can receive benefits even if they can work in a different role than the one they originally performed. I think the industry definitely needs to take a look at this,” he said.