THE BUDGET WE HAD TO HAVE!

“The Budget should be balanced, the Treasury should be refilled, public debt should be reduced, the arrogance of officialdom should be tempered and controlled, and the assistance to foreign lands should be curtailed, lest Rome will become bankrupt. People must again learn to work instead of living on public assistance.” – Cicero , 55 BC

We can’t help but think Cicero was on the money (no pun intended) when he proclaimed these words so long ago. Now 2,069 years later, our countries leaders are struggling to find the ‘straight talk’ to deliver in essence this same message. Instead and regardless of positive intent, poor strategy, poor communication and poor media management have combined to kill the story of the budget and its real purpose.

It has now undeniably become totally consumed by the focus on broken promises, the denial of broken promises, the possibility of an early double-dissolution election, a civil war with state leaders over funding cuts, and a premature debate about whether the GST rate should rise or its base broaden. As Jennifer Hewett said in her column last Friday (Australian Financial review) “may the political circus begin”.If you really wanted to sell a budget, you should look at everything the Government has done over the past two weeks and do the opposite.There is no denying of course that these problems arose from the landmines Tony Abbott himself planted during the election campaign when he pretty much promised everything to everyone. Accordingly Australians (based on the polls) have decided the budget is unfair. Some may have a point and they’re right, too, to complain about Abbott’s broken promises.
But it has to be said, was it ever really going to be possible to return the budget to surplus without raising taxes, or cutting spending on health and education, or reducing pension entitlements?Perhaps Jonathan Holmes was right when he said “The Australian electorate will punish the tellers of hard truths, and reward the snake-oil salesmen, the good-news spruikers, the soft-soapers”. (Sydney Morning Herald, 21st May 2014).
Arguably the most objectionable part of all, is Bill Shorten’s refusal to recognise the scale of the budget repair task, in-fact he refuses to acknowledge there’s even a problem, to use his word it’s all a ‘myth’.
“Yet it is no myth that Australia has just enjoyed the greatest burst of good fortune in at least a century, but is still entrenched a structural budget defecit that leaves the working men and women who Labor claims to represent highly exposed”. “Squandering the privilege of leading the nation should call for soul-searching, including over just how a government left a budget deficit stretching well into the 2020s” David Rowe, Australian Financial Review
A political circus indeed!Back to the budget purpose – bring Australia back to surplus and address the demographic necessity of change.
Politics aside let’s look to the facts, the real economics behind the 2014/15 Budget and our verdict – The budget we had to have!People weren’t ever going to like this budget, it is tough and it will hurt everyone. There are many budget measures we’d advocate for change (is the age of entitlement really over for everyone…), however we are broadly supportive of it’s purpose and we do believe it’s the ‘budget we had to have – here’s why.

The International Monetary Fund has shown that of all the major countries it monitors;

We do agree that right now Australia does not really have a ‘budget emergency’: the budget deficit has not come anywhere near the 10% of GDP levels that sparked concern in the US, parts of Europe and Japan.

That said, the budget is always about balance and Australia does have a budget problem. After the biggest boom in our history, there is an argument for stating that the budget should be in better shape.
“In 2006 Ireland’s net public debt was close to where Australia’s is now and yet it skyrocketed when its boom turned to bust. Given our resources boom and 20 plus years with no recession we should be much closer to Norway which is running huge surpluses and negative net public debt (-205% of GDP).” Dr Shane Oliver, Chief Economist AMP

Against this backdrop, the 2014-15 Budget is a step in the right direction with the measures put in place to control spending growth over the medium to long term likely to put it on a sustainable path.

Without some fiscal repair, Australia was exposing itself to huge risks, if and when the cycle turns negative.

2. Australia is facing a longevity crisis.

The below chart compares retirement ages and life expectancies in 2009 with those from 1901. Figures are based on ABS Australian Historical Population Statistics 2008; ABS Deaths. Australia, 2009.

Medical technology has prolonged both the quality and the quantity of life. However we aren’t working any longer to pay for this.

There is an interesting irony in the government’s decision to allocate the $7 dollar GP surcharge to a $20 billion medical research fund. It goes without saying that we all hope this money leads to a great many medical breakthroughs, which will inevitably prolong our lives even further…

Putting even more pressure on the social security system is the ‘Boomer Impact’.
In the next 20 years the number of people over 65 years in Australia is set to double.

Based on conservative figures Australia would need to find a whopping extra $13 billion dollars per year to support it’s ‘boomer’ pensioners. 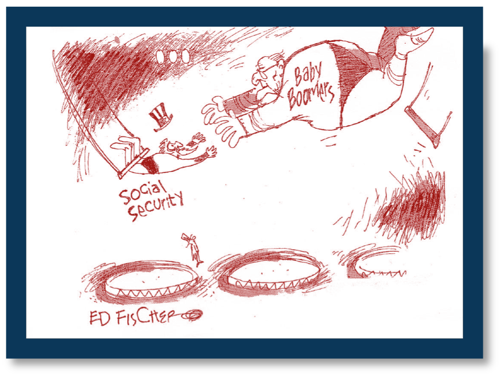 The other challenge that comes with the retirement of the baby boomers is the issue of productive workers leaving the workforce.

The impact here is twofold;

In effect this will place the economy in a pincer movement which unless managed very deftly by successive governments over the next 20 years will deliver genuine potential for the budget emergency that has been mooted.

These statistics all come together to paint a dramatic picture of the demographic, market and regulatory landscape around retirement incomes and why things have to change.

Just a “myth”, “no emergency” they say, we’ll let you be the judge of that!

Published On: May 28th, 2014Categories: Federal Budget, The FinSec View